From slaying at exclusive red carpet events to casually releasing LGBTQIA+ anthems and being involved with FX’s groundbreaking ballroom drama, “Pose,” Mila Jam was born to be a star. She’s a self proclaimed “artivist,” someone who blurs the lines between art and activism. In the coming week and a half, she’ll be preparing for the release of her four-track EP, “bruised” which deals with the violent situations endured and felt by women of color in the transgender community.

I’ve known about Mila Jam for a little more than two years. The first time we crossed paths was on the set of her interview for What’s Relevant TV. I was busy fulfilling my duties as the social media coordinator for WRTV and she was, well, being interviewed. There was very little room for conversation, or even a proper introduction but, for some reason, I knew I had to keep up with her story.

Now, this is your opportunity to meet Mila Jam.

POP, uncultured: Mila! Thank you so, so much for taking the time out to be interviewed by POP, uncultured. When I think of POP, uncultured and what it stands for, you come to mind. Since the beginning of your career as Britney Houston, up until now, the one thing that’s remained constant is your unwavering love for pop culture. You love it simply for what it is and what it has always been, but you also work tirelessly to make sure that it evolves into something better. That’s true love in my opinion. When did that love for pop culture develop and what is it that keeps it alive?

Mila Jam: I’ve always loved pop culture. As a kid growing up in the deep South, it made me feel a part of something bigger than myself. It developed from the need to feel included. It filled my dreams, molded my ideas and inspired my drive. Dreams and opportunities keep it alive.

PU: In the video for “Better Days,” you’re dancing around in the middle of Time’s Square, one of the world’s pop culture hubs. Was that one of the subliminal messages behind the location of the video or was this parallel just drawn out of a coincidence?

MJ: The concept behind the “Better Days” music video was very simple. It was about being in the center of the universe and in the moment. The most loved place in the world. Also, the producer, Shane Gunn lives in Germany and Times Square resonates so well internationally.

PU: On “Better Days” you’re credited as the featured artist. It’s quite fascinating to me that the DJ Khaleds and the Mark Ronsons of music are now being credited as artists on tracks that they produce. In a way, it’s great to put producers at the forefront of the music they make. But producers used to stay behind the scenes and now they’re touring and selling out shows. How does a change like that happen and what does it mean for recording artists who strictly sing or rap? Is that change felt? Does it create a pressure for recording artists to produce their own music?

MJ: Dope question. In terms of new artists finding their footing in today’s industry, I think it’s quite crucial to one’s success to be featured on a reputable producers project. Producers are putting big names on the map. It’s about reaching a wider audience. Competing can be tough. Collaborating can be rewarding.

PU: By the way, congratulations on “Better Days” reaching 50,000 streams on Spotify alone! That means that people willingly pressed the play button FIFTY THOUSAND TIMES! How does that feel?

MJ: I’m extremely proud of the momentum. I have a lot of faith and belief in the message of this track. In this Internet age, things are streamed hundreds of millions of times so the numbers can often seem not enough or groundbreaking. I’m not sure how many streams it would take for this song to be groundbreaking, but I am very proud of every step of the way.

PU: You have your EP, “bruised,” coming out on Oct. 4. Without too much detail, what can we expect?

MJ: Get ready for the new project. “bruised.” An emotional four-song soul-pop EP reflecting on toxic relationships, especially towards transwomen of color, abuse and finding your will to survive, with the title music video featuring appearances by Laverne Cox, MJ Rodriguez, Yuhua Hamasaki and Ryan Preimsberger. Expect the most emotional and visual piece of work I’ve ever assembled.

MJ: It’s important because experience outweighs theory. It’s about listening instead of overshadowing. It’s about believing that what we are taught to believe about any demographic of people is often not true. TWOC are enchanting, resilient, passionate and inspiring. No doubt.

PU: My favorite activist is Raquel Willis. My bet is that she’ll be president one day and there’s no one above her on my list of viable possible candidates. She actually inspired me to be more than just accepting of the transgender community, but to be knowledgeable and to actually fight for what’s right, rather than just accepting it as right. I noticed that you two follow one another on Instagram. Have you two met?

MJ: Raquel is awesome. She embodies the spirit of purpose in her womanhood. We’ve definitely crossed paths in our community. Gorgeousness.

PU: On May 17th, you posted a picture of one of the poster ads for FX’s groundbreaking show, “Pose,” and you said that one day you’d be able to share the story behind the poster. What can you tell us about it?

MJ: I was the stand-in model for that iconic poster. I set the physical pose and mood for this billboard, which features my sis MJ Rodriguez as Blanca. I am also honored to have my own. 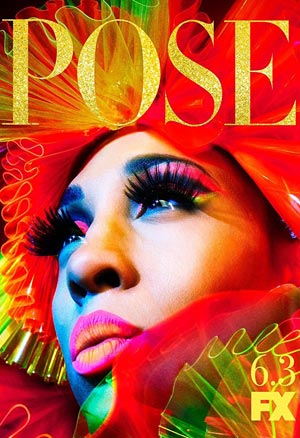 PU: Speaking of posing, you have been serving some ICONIC looks this past year! The green hair… the monochromatic outfits… Who are your style inspirations? What elements are needed to make a look iconic?

MJ: I love visuals. I love things that pop. I love patterns and sets that give finished polished looks. Construction and lines. I love the vibes & styles of Solange, Tracee Ellis Ross, Janet [Jackson], Janelle Monáe, J. Lo, Joan Smalls, Blake Lively and Bey. My inspiration comes from so many different women.

PU: In your Instagram bio, you describe yourself as a “Local Beyoncé” and I think that speaks so much to your playful nature. However, to some extent, there is some truth to that! Much like Queen B herself, your work ethic is insane! How do you keep yourself going? When do you get some down time?

MJ: Why, thank you! I believe the time is now to move with intense purpose and drive and energy. Tomorrow is not promised to any of us. I have always worked hard and I love the work. Self-motivation and determination is so important in my business. I do what I love so I find time to reflect and center when I can.

PU: Are there any other projects you’ve involved yourself with that you can talk to us about? We’re always down for a good exclusive.

MJ: The element of surprise is best, but Oct. 4 is going to be epic. Also, performances at the Robert B. Moss Theater in Richmond, Va. on Oct. 27 with Ari Gold and The Bitter End in the West Village early November (TBD).

PU: Lastly, is there anything that I didn’t ask about that you’d like to mention? Anything you want people to know after having read this interview?

MJ: Know that dreams are hard candies coated in endless work, continuous passion and unwavering determination. And keep up with me @themilajam